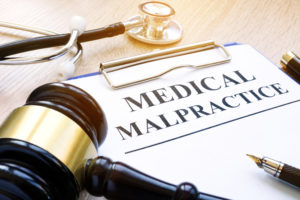 You expect outstanding health care and rely on your doctors, nurses, and other medical professionals to uphold the highest standards of practice. Nevertheless, mistakes are made. At times they result in serious injury or death.

It happens more often than you would expect.

In fact, medical errors are the third leading cause of death in America after heart disease and cancer, based on a Johns Hopkins Medicine study of eight years of death records. Nearly 10% of all deaths in the United States can be traced to medical error. More than 250,000 Americans die from medical mistakes annually.

Yet, why don’t we learn about these tragic incidents in the media?

If a health care provider’s negligence has caused you serious medical problems and financial losses, there’s hope. Call now for a free consultation with the medical malpractice team at Sansone & Lauber. We can assess your situation and guide you through the intricacies of filing a medical malpractice claim.

What Are the ‘Big Three’ Misdiagnoses?

A more recent Hopkins study estimates that one in 10 people (9.6%) with symptoms caused by a major vascular event, infection, or cancer will be misdiagnosed. The three categories of diagnoses are together referred to by the authors as the “Big Three.”

Of people inaccurately diagnosed with any of the top 15 “Big Three” conditions, about half (53.9%) suffer a permanent disability or death because of the error and represent roughly half of all the diagnostic error-related serious harms across all conditions.

Not all diseases are equally likely to be misdiagnosed. For infections and major vascular events, the authors found that the more uncommon diseases are most likely to be missed. By contrast, for cancers, it appears to be those with the least successful diagnostic screening programs.

Among the 15 diseases analyzed, spinal abscesses (an infection that can compress the spinal cord and cause paraplegia) was the disease most often missed (62.1%). More than one in four aortic aneurysms and dissections have a critical delay in diagnosis (27.9%). More than one in five (22.5%) lung cancer diagnoses are also meaningfully delayed.

The authors say the study should be used to target efforts to improve diagnosis among these conditions.

“Delayed and inaccurate diagnoses are a serious threat to patient safety, especially for people with cancers, infections, or major vascular events, such as stroke or heart attack,” said lead author David Newman-Toker, MD, Ph.D., with Hopkins. “Misdiagnoses can have catastrophic effects, leaving patients and their families picking up the pieces after a death or permanent disability.”

Bipartisan legislation to begin to tackle this problem was introduced in the U.S. House of Representatives in November 2019. It would fund 4-8 new Research Centers of Diagnostic Excellence at U.S. academic medical organizations and require federal health care agencies to clear pathways in their own funding portfolios for more diagnosis-related research.

Here are a few examples of misjudgments that can result in medical malpractice:

Can You Sue a Doctor for the Wrong Diagnosis?

If a health care provider’s negligent mistake has caused you serious medical problems and financial losses, you may be entitled to recover full and fair monetary damages. If you experienced medical care that left you worse off than you were before, you have a right to find out if it was the result of medical malpractice.

Misdiagnosis can happen in emergency rooms, in your doctor’s office, and in-hospital labs, to name a just few. The extent of your injuries may not be fully known until some time after they occur.

At Sansone & Lauber, we’re here to provide effective representation and help you protect your rights. We have experience defending insurance companies, so we know how they think. It gives us an edge in litigation against them. The proof is in the multi-million-dollar cases we’ve won for our clients.

Beyond the monetary damages, you may be entitled to, you’ll gain personal satisfaction knowing that your efforts help prevent these types of injuries from happening to other people in the future.

Many victims suffer in silence after their surgery or medical procedure leaves them disfigured or horrifically injured. Honest mistakes happen. But when a provider makes negligent errors of a serious nature, it’s worth evaluating.

Reach out to us to discuss the specifics of your medical malpractice claim. We represent clients in the Metro-East and throughout Southwestern and Southern Illinois, as well as in Eastern Missouri, including the St. Louis metropolitan area.

When you hire Sansone & Lauber, you hire a firm that always does what is necessary to ensure your case is thoroughly prepared and positioned for full compensation. You’ll be glad to know you’ll pay us no fees unless we win.