If you don’t get paid, we don’t get paid.
Free Consultations 314-863-0500
Home Our Firm Injury Attorneys Serving Missouri and Illinois 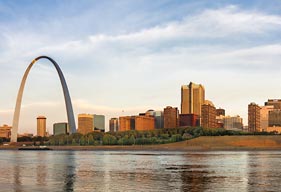 Sansone & Lauber Injury Lawyers is based in St. Louis, as we routinely handle personal injury cases throughout Missouri and in the Kansas City and Springfield areas. We also represent clients throughout Illinois, including St. Clair and Madison counties.

If you have been injured in an accident, contact Sansone & Lauber to discuss your legal rights. Call us at 314.863.0500 to schedule a free initial consultation. You owe it to yourself to assess any potential legal claims you might have.

St. Louis has a long and proud history as a major city in North America. Founded in 1764 by French fur traders, St. Louis was transferred to the United States as part of the 1803 Louisiana Purchase.

It is the 21st largest metropolitan area in the country with a population of 2.9 million.

The economy of the city and surrounding communities is based primarily on manufacturing, transportation, tourism, and services. St. Louis is the home to numerous Fortune 500 companies, including Monsanto and Graybar Electric. Other notable companies that call the area home are Peabody Energy, Ameren, Ralcorp and Sigma-Aldrich.

The world-famous Gateway Arch on the banks of the Mississippi River is the city’s most notable landmark. Three professional sports teams are based in St. Louis: the Cardinals (MLB), Rams (NFL), and Blues (NHL). The city also boasts a world-class symphony, as well as a rich musical heritage in jazz and the blues.

Sansone & Lauber is active in the St. Louis and Missouri communities. Attorney Ben Sansone, an avid bicyclist, is a member of the Missouri Bicycle and Pedestrian Federation, and supports bike safety groups and associations advocating for better laws to protect cyclists on the road. Attorney Sansone is also involved in Helmets First!, which provides bicycle helmets to low-income children.