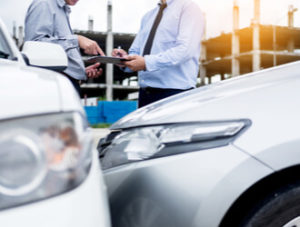 Ben Sansone is a former insurance defense lawyer who represented insurance companies and helped them deny property and casualty claims. Insurance companies use just about every excuse possible not to pay what you are owed; often citing minor mistakes in your insurance application and calling them material (major or important) misrepresentations.

Whether you’ve suffered car accident injuries or experienced damage to property and need assistance understanding your insurance coverage or have had an insurance claim that’s been denied we are here to help.

Here are some of the insurance coverage claims our group has handled on behalf of our clients:

If the insurance company is acting in “bad faith” and refused to pay on the claim that should be paid after reasonable investigation then you may be entitled to punitive damage to your vehicle and payment of attorney fees.

Will My Insurance Go Up If I Make an Injury Claim?

A concern many people have is letting their insurance company know they were involved in a car accident, even when it is clearly and 100% not their fault. The common concern I hear is, ” Will my insurance go up?”

Additionally, some people are concerned about making a claim to their auto insurance for injuries they received from an unidentified driver of a hit and run accident (also called an uninsured motorist). Also, even medical payments claims, or “Med Pay” claims, which is simple coverage to pay for any medical bills as a result of a car accident regardless of whose fault it is.

Simple fact: IT IS ILLEGAL FOR YOUR INSURANCE TO RAISE YOUR RATES IF YOU ARE NOT AT FAULT!

Missouri Law: “In no event shall an insurer request an increase in premium from any insured in connection with any claim arising out of any accident for which the insured was not at fault.” 20 CSR 500-2.600(3).

Under Missouri Insurance Regulations, specifically 20 CSR 500-2.600 Rate Increases: which states that any rating plan is discriminatory if it adjusts a driver’s rates or premium based on an accident where a claim is made on their policy (liability claim, med pay, Under-Insured Motorist, or Uninsured Motorist), but they were not at fault.

In most cases it is obvious who is at fault, additionally, the legal elements lay out several instances that deem it automatically not your fault, the specific standards are accident or claims that occur:

In today’s marketplace where there are literally hundreds of insurance companies competing for your business, don’t let worries about insurance premiums discourage you from pursuing a legal claim for injuries from a car accident. If your insurance rates go up on a case where you were not at fault, then fire that insurance company and hire a different one! You will probably find out the new insurance company will have lower rates than you had before the accident.

An Uninsured Motorist Claim (“UM” Claim) is a claim directly against your auto insurance carrier for injuries caused by another driver that did not have insurance. If you are not at fault then an uninsured motorist claim will not negatively affect your insurance rates or history. Even if it does, that is no reason to forgo a UM claim, there are plenty of other auto insurance companies that will give you a good rate. Drivers pay, as part of their auto insurance premium, for this coverage just in case you are ever injured by a driver with no insurance.

Uninsured motorist claims occur obviously when the other driver has no insurance, but also if the other driver is unidentified, such as when a phantom vehicle that may have run you off the road or a hit and run accident where the at-fault driver fled the scene and no one was able to identify the car or the driver.

Who is “Insured” for purposes of making a UM Claim?

Typically, anyone legally driving the car with the policy of insurance, additionally, if the driver has their own UM coverage on a separate car that they were not driving at the time of the uninsured car accident that will usually apply as well. Depending on the various policy provisions in different auto insurance policies, sometimes this answer can be more complicated. It is important to have a St. Louis car accident lawyer review all the possible insurance coverage when evaluating your case.

The injured person pursuing the UM claim must prove that the at-fault driver was uninsured. For example, by Missouri statute, a hit and run vehicle is considered an uninsured motor vehicle. Otherwise, the claimant must make “reasonable efforts” of the existence or non-existence of insurance and no proof could be established. Additionally, the UM insurance carrier has no affirmative proof that there was insurance coverage. See Stuart v. State Farm Mut. Auto. Ins. Co., 699 S.W.2d 450, 454 (Mo. Ct. App. W.D. 1985).

By law, an unidentified vehicle is an uninsured motor vehicle and auto insurance policy provisions cannot alter this.

A clause conditioning recovery under uninsured motorist coverage based upon the liability of an unidentified hit-and-run “phantom vehicle” upon the requirement that there be corroboration by the testimony of a person not having a claim as a result of such an accident contravenes the statute and is an invalid condition. See Kramer v. Insurance Co. of North America, 54 S.W.3d 613 (Mo. Ct. App. W.D. 2001).

In either, even the jury is aware that the verdict or judgment will be paid by the UM insurance coverage. However, if possible it is better to name the uninsured driver as well. This way your case is against the at-fault driver and not just against the insurance company.

In the situation where the at-driver and the insurance company are both named, the jury will be first asked to determine if the driver was at fault and find the amount of a verdict against the at-fault driver, then they are instructed to simply transfer that number against the insurance company as well as long as they agree the diver was uninsured. This way of presenting the case to a jury typically results in larger verdicts for our clients.

Contact us online or call us at (314) 863-0500 to set up a FREE consultation with a personal injury lawyer from Sansone & Lauber to discuss your case and detailed review of your insurance policy and/or claim.