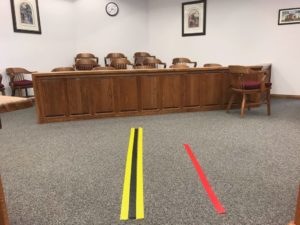 In November 2017, our personal injury lawyers Ben Sansone and Brent obtained a jury verdict of $1.75 Million for our client. The last offer before trial was $325,000. In a July 2014 truck accident, the driver crossed the yellow center line on Highway WW and caused a crash as he was trying to swerve back into his lane. The truck driver’s lawyers and experts claimed it was just an “accident” and no one was at fault. They claimed both drivers were equally on the yellow line at the same time.

On the first day of trial, our accident reconstruction expert created the yellow lines on the courtroom floor with black and yellow duct tape. The reporting Highway Patrol trooper indicated that the point of impact was 9’2″ into the lane. We marked that with red duct tape. Therefore, the evidence was on the floor in front of the jury during the entire 4 day trial. The trooper’s measurement was strongly attacked by the defense. The reporting trooper took detailed pictures that the defense claimed showed tire skid marks from both vehicles on the yellow line at the time of the crash.

The plaintiff needed a spinal fusion surgery in his lower back. Also, he required a disc replacement surgery in his neck. Both surgeries went well and he had a good recovery. However, even the best back surgeries carry with it a risk of future repair surgeries. We asked the jury to take that into account.

This was a strong victory for the Plaintiff, especially considering the trial judge would not let us tell the jury about the the truck driver’s employers internal investigation. Their internal investigation found that the driver crossed the yellow line and caused the crash. Despite this, they judge allowed them to keep that secret and they claimed at trial that their driver did not cross the center line.

Evidence of Company Conclusions regarding the Collision and their Accident Report SHOULD HAVE BEEN Admissible as Admissions Against Interest.

Defendants denied negligence and argued at trial the Defendant driver did not cross the yellow center line. Yet his employer determined that the truck accident was preventable, and documented in writing how it was caused;  “carelessly crossed the center line”. Moreover, that report was reviewed and the conclusions were agreed to and approved by a committee of four. Their agreement and ratification of the investigations conclusion was put in writing.

It was a gross miscarriage of justice to allow Defendants to defend this case by saying its driver did nothing wrong. Just a few days after the accident the company admitted it was preventable. Moreover, the only legal argument defendants attempt is to roll this evidence into a subsequent remedial measure.

“An admission by a party-opponent is made by a party to the litigation or by one in privity with or identified in legal interest with that party.” Nettie’s Flower Garden, Inc. v. SIS, Inc., 869 S.W.2d 226, 229 (Mo. App. E.D. 1993) (emphasis added). In Missouri, an admission of an agent or employee “may be received in evidence against his principal, if relevant to the issues involved, where the agent, in making the admission, was acting within the scope of his authority.” Bynote v. National Super Markets, Inc., 891 S.W.2d 117, 124 (Mo. Banc 1995) [quoting Roush v. Alkire

Truck Lines, Inc., 299 S.W.2d 518, 521 (Mo. 1957)]; see also Henson By and Through Lincoln v. Board of Educ. Of Washington School Dist., 948 S.W.2d 202, 209 (Mo. App. E.D. 1997) (“when an employee‘s admission is relevant to the issues involved, it may be received in evidence against an employer litigant, regardless of the employee’s availability, where the employee acted within the scope of the employee‘s authority in making the admission”). Thus, “an admission by an employee is admissible against the employer if: 1) the admission is relevant to the issues involved and 2) the employee was acting within the scope of his authority when the admission was made.” Skay v. St. Louis Parking Co., 130 S.W.3d 22, 27 (Mo. App. E.D. 2004); see also Bynote at 123 (“the existence and scope of declarant’s agency determines admissibility, not whether the person has broad management or executive responsibility”).

In Missouri, courts have defined the term “admission” very broadly and generously so that testimony received as an “admission” need not be a direct admission of an ultimate fact in issue. Coulter v. Michelin Tire Corp., 622 S.W.2d 421, 433-34 (Mo. App. S.D. 1981) (holding the fact the plaintiff “had no idea” or “did not remember” certain details of his case on one occasion yet could remember them on another occasion was admissible as an admission). Thus, testimony may be considered an “admission”—thereby, admissible evidence—even “if it [only] bears on the issue incidentally or circumstantially.” White v. Burkeybile, 386 S.W.2d 418, 422 (Mo. 1965). Moreover, “admissions of a party are not inadmissible merely because they constitute expression of opinion…so long as it is based on matters not beyond the scope of the personal knowledge and understanding of the declarant.” Bowls v. Scarborough, 950 S.W.2d 691, 702 (Mo. App. W.D. 1997) [citing Cummings v. Tepsco Tennessee Pipe & Supply Corp., 632 S.W.2d 498, 501 (Mo. App. E.D. 1982)]. Therefore, and most importantly, a party is entitled to relate his opponent’s verbal opinions as to fault in a negligence action because such evidence is admissible as an admission of a party-opponent. Cummings, 632 S.W.2d at 501.

Here, there is simply no reasonable debate about the fact that the company  determination that the accident was caused by its driver crossing the center line and comes into evidence. Plaintiff is not suggesting that it is “binding” or that it prohibits other proper evidence Defendants wish to present. The jury is more than capable of evaluating all the evidence on this topic.

Despite a difficult rulings form the court excluding key evidence, our trial team was able to obtain a substantial victory for our client.