If you don’t get paid, we don’t get paid.
Free Consultations 314-863-0500
Home Blog Missouri Law Revokes License In Accidents Caused by Failure to Yield 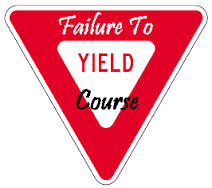 Failing to Yield Can be a Deadly Mistake

Obviously, if someone causes a car accident and injures someone, they can hire a personal injury lawyer to enforce the civil negligence laws and get a money recovery from their auto insurance company to make up for their injuries, medical bills, lost work, etc….

Currently, Missouri Statute 304.351 (2013) lays out criminal penalties for failure to yield car accidents that cause an injury or death, including mandatory license suspensions. As the law is currently written the driver “may” lose their license if they are guilty of failing to yield and cause:

This tougher law takes a lot of discretion away from municipal and city judges who may not normally impose very tough penalties on drivers that cause car accidents for not yielding. The unintended consequence of this law is that it may make civil cases just a little harder to pursue, I’ll tell you why…. once way to prove negligence of the other driver is to use a guilty plea they made in court on the traffic ticket they were issued. When the penalties are lower drivers are more likely to just plead guilty, and therefore admitting fault that can be used int he civil personal injury case to prove fault. When the penalties are extremely stiff, they are more likely to hire a lawyer to defend the criminal charges and then end up with a plea deal that reduced the charge to something else to avoid the harsh penalties.

How to Get Revoked License Back

So now, more drivers will hire lawyers to defend the failure to yield charge and push for plea deals amending the charge to something else to avoid the penalties, and without a vigilant lawyer on your side, they will often succeed. as it is common place in local courts to amend failure to yield charges to non-moving violations.

Whenever we take on a new case that involves a traffic violation by the other driver, we ALWAYS contact the prosecutor for the local court handing the ticket and make sure they are aware that their is an injured victim and demand that they do not offer a plea deal to the driver. More often than not, the prosecutor is not aware of the injuries and once they are they agree not to amend the charges and make sure they prosecute the case fully. We do this anytime their is a criminal charge arising from the car accident, particularly drunk driving charges that arise from the car accident.  see “Evidence of Intoxication”.

Hurt by a driver that failed to yield or stop? Call the St. Louis personal injury lawyers at Sansone & Lauber (314) 863-0500 or contact us online.