$7,300,000.00 settlement featured in Missouri lawyers weekly for December 2019. This settlement was secured by our lead personal injury lawyer Ben Sansone. We represented a minor that was a passenger in her mother’s car when they were involved in a crash with a school bus. The school bus failed to yield and made a left turn directly in front of and across our client’s lane. This caused a T-bone crash with the bus. The severity of the injuries made this a very difficult case, the minor will never fully recover and will be in a wheel chair the rest of her life. On top of the settlement, we were bale to secure public funding for her future medical care. Therefore, the settlement money can be used for her outside of medical expenses.

Also, we had to make a hard decision and were forced to make a claim against her mother that was driving because she was speeding and had her 5 year old daughter in the front seat rather than a car seat that was in the back. The school district had a strong defense based on the actions of the mother. Emergency personnel reported the minor would have never been hurt so bad had she been in a child seat. However, despite this, we were able to reach a settlement for the policy limits of all insurance available to the school district. 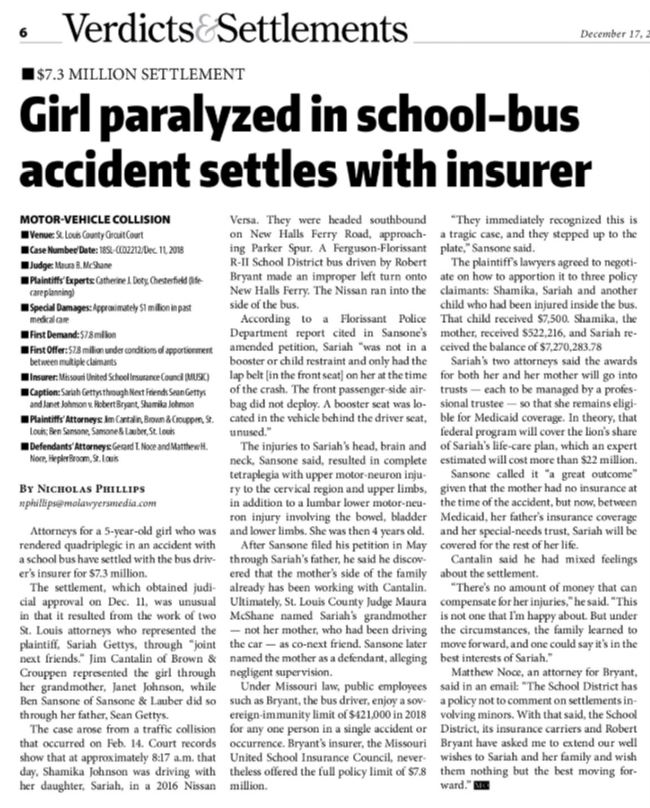 We have the Experience with proven results. For aggressive injury lawyers call (314) 863-0500 of email Ben Sansone Ben@MissouriLawyers.com.