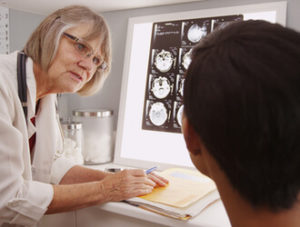 Neuro-cognitive stall: “…a halting or slowing in later stages of cognitive, social and motor development beyond a year after brain injury. Despite remarkable recovery during the first year after severe brain injury, children may appear to ‘hit a wall’ or ‘fail to thrive’ in terms of their continued cognitive growth. It is not so much that they lose already acquired skills as it is a failure or lag in development of later emerging cognitive milestones”.

Falls and Motor vehicle accidents account for over 70% of injuries of pre-school children, and often produce diffuse closed brain injuries where mostly the frontal area of the brain is damaged. — See, Cognitive indicators of vocational outcome after severe traumatic brain injury (TBI) in childhood. Additionally, In children between the ages of 0 and 14, TBI results in 2,585 deaths, 37,000 hospitalizations, and 435,000 emergency room visits.

Pediatric brain injuries require special care as kids who suffer a head injury are typically more susceptible to permanent brain damage than adults, even when the force of the injury is the same. Children’s skulls are about 1/8 as strong as an adults, this combined with eh fact their brains are still developing, means trauma to the head and result in much more harm to a child than an adult.

It is not uncommon for neurological deficits (symptoms of a brain injury) to suddenly appear years later after the child has developed.

For example, frontal lobe development occurs later in brain development, therefore, an injury to a young child’s frontal lobe may very well not affect the child until he or she is into their teenage years and will effect higher level reasoning, social interactions, and interpersonal skills. The frontal lobe is generally not fully developed until around the age of 16, therefore the symptoms may not be fully recognizable until that age.

Just like with the frontal lobe example, injuries to different parts of a child’s brain will become more apparent once they reach an age when that part of the brain should be fully developed an those skills are needed for school or other activities. So if a very young child, such as an infant, is injured, the injuries to her reading and writing center of the brain will not be apparent until she reaches school age, and even then it may not be till later in grade school.

Diagnosing the concussion or head injury symptoms in children requires specialists and even then it is sometimes very difficult to distinguish the symptoms of a brain injury from the behavioral and emotional changes kids go through as they mature towards adulthood. A young child’s behavioral problems or academic challenges in school may be related to frustration from not being able to concentrate and struggling with the hidden symptoms of a brain injury.

As a brain injury lawyer, I have represented many clients suffering from varying degrees of head trauma. In my experience, my clients’ most difficult issue is that their injury is hidden, and people see them from the outside as completely normal and expect them to be able to function normally and do not recognize the challenges they have as a result of their brain injury; such as short term memory loss making it very difficult to follow a longer conversation. This often leads to victims disengaging from social situations. An adult can explain this to a doctor, however, children who are injured at a very young age, do not know what is was like to be “normal” and to them their injured state is normal.

Children injured at a young age have been shown to have difficulty with performance IQ scores, meaning that a moderate to severe brain injury has a significant impact on “fluid” intelligence skills. Meaning children may perform better in structured environments, such as school, but then have difficulty in less structured environments. See Katie’s Story.

The final assessment of a childhood brain injury and it symptoms should be done once the child becomes an adult. Unfortunately, in most lawsuits, the final assessment cannot wait until adulthood. “It is in fact the opposite – we must assume that the difficulties currently noted are going to compound themselves and get worse in the future.” — Rehabilitation of Brain Injured Children

The personal injury lawyers at Sansone & Lauber Personal Injury Lawyers, are experienced in representing the families of children with head injuries. You need a lawyer that knows the legal and medical issues in your child’s case. Call us for a free consultation at (314) 863-0500 or contact us online.