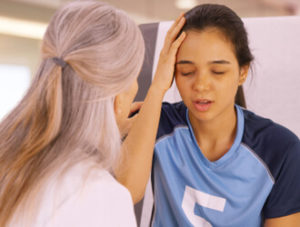 MYTH: A Normal CT Rules out a Concussion

MYTH: Loss of Consciousness (knocked out) makes a concussion worse

Loss of consciousness is a factor in determining a concussion; however, it is not necessary. In fact, many neurologists will agree that someone who is not knocked out can easily suffer a worse concussion than someone who is knocked out. Additionally, only about 10% of concussions result in black outs.

Helmets help prevent skull fractures or other structural damage to the scalp or skull. Helmets cannot stop the brain from suffering the force exerted on the head through the helmet, in other words, helmets cannot stop the brain from shaking inside the head, which is a major cause of concussion. Many Such concussions, such as ones suffering in rear end car crashed, are caused by rotational forces or acceleration, the head whips side to side and the brain moves inside the skull, bruising the brain when it bangs against the inside of the skull or even stretched to the point of injury.

Many people feel the symptoms of a concussion should be immediately obvious. This is generally true, however, the symptoms can sometimes take days to develop or recognize. For example, right after a concussion you are not thinking about short term memory or concentration, you are thinking headaches and disorientation. The memory and concentration problems may not become apparent for several days.