Types of Brain Injuries and Diagnosing Them 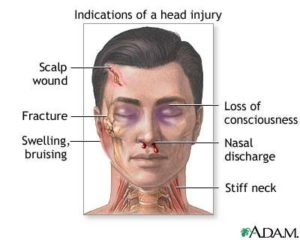 Brain injuries are generally categorized as either:

A Mild Traumatic Brian Injury – MTBI- is typically defined as someone suffering disruption of brain function from a traumatic event, such as a car crash, and has one of the following:

A Traumatic Brain Injury – TBI – is defined by using the above criteria but there are also objective physical findings of injury, such as cut to the head; brain hemorrhaging, bleeding in the brain or ruptured arteries in the brain, prolonged unconsciousness, extensive memory loss, observable neurological changes such as slow reaction time, confusion, no response to painful stimulus, incomprehensible speech, abnormal CT findings, and operative lesions. There are many more symptoms that can lead to the conclusion of a TBI, but basically, anything more severe than a MTBI is a TBI, either a moderate or severe traumatic brain injury.

Traumatic brain injuries are also defined as “focal” or “diffuse”. A focal brain injury is focused to one area of the brain and is caused by a direct wound or hit; such as your head hitting a windshield in a car accident. A “diffuse” is widespread and is also referred to as a multi-focal injury. Think of a diffuse injury as swelling of the brain and affecting many parts of the brain. Diffuse head injuries often occur as the result of car accidents and from anoxia, which is the lack of oxygen to the brain.

Post-concussion syndrome (‘PCS”) is the most common type of diagnosis after a head injury since it can be caused from TBI or MTBI since even minor traumatic accidents, such as low speed car accidents can cause these types of brain injury. PCS is much more prevalent however in more severe accidents and injuries. Post-Concussion Syndrome is estimated to affect about 30% of people who suffer a mild traumatic brain injury. These mild traumatic brain injuries are the types of injuries that are common in car accidents where the injured person loses consciousness or blacks out even for just a few seconds.

Diagnosis of a Head Injury

Traumatic brain injuries are usually diagnosed visually and through a CT or MRI. If you suffer even a slight injury to your head in an accident, most doctors or emergency rooms will send you in for a CT scan of the head or an MRI as a first step in diagnosing a head injury. It is well known, however, that CT and MRI results are typically normal in patients that suffer a minor traumatic brain injury. “Conventional imaging with CT or MRI is pretty much normal in MTBI patients, even though some go on to develop symptoms, including severe cognitive problems,” — MRI Shows Brain Disruption in Patients with Post-Concussion Syndrome, from the Radiology Society of North America, 11/21/2012.

Most hospital and doctors do not have access to a Resting State Functional MRI. A Functional MRI exam will show positive findings of a brain injury through distinct changes oxygen level fluctuations that are associated with brain function. Researcher have found that the function MRI shows “decreased functional connectivity in the posterior network of the brain and increased connectivity in the anterior component, probably due to functional compensation in patients with PCS, the reduced posterior connectivity correlated positively with neurocognitive dysfunction.”

In an ideal setting, suspected brain injury victims will be assessed with a functional MRI, however, in the vast majority of situations this method of diagnosing a concussion or other brain injury is just not available. Diagnosis of head injuries that appear normal on a CT or MRI are evaluated and treated based on the subjective complaints of the victim and the observations of the victim’s behavior.

Indicators of a Head Injury

First, did you hit your head and lose consciousness? While this is not a requirement for a head injury, it is a good indicator. Loss of consciousness and head injuries typically go hand in hand. Oftentimes client will be unsure if they were knocked out, this is because accidents happen fast and adrenaline kicks in, making it difficult to recall if a blackout occurred. But is you think you hit your head and were left dazed and confused right after a collision, then a doctor must be told of this and investigate further if a head injury occurred.

Additionally, are you suffering from headaches? Other than loss of consciousness, headaches are the primary indicator of a head injury. Oftentimes people will suffer tension headaches after an accident, however, if the headaches persist, tell your doctor as they may not be related to muscle tension and may be a result of a concussion or other type of head injury.

The list goes on, but be aware of any neurological deficits and tell your doctor. When meeting with new clients we have an exhaustive list of signs and symptoms of even a minor head injury, this is used as many people may not realize they are even having the symptoms of a head injury unless they are specifically told of many of the symptoms. Common symptoms not mentioned above, mood swings, trouble concentrating, slow though process, and memory issues.

If you suffer from a head injury it is important that you contact a lawyer familiar with head injuries and experienced in conveying to the insurance company or a jury the significant impact these types of injuries have on your life.