Treatment of a Brain Injury 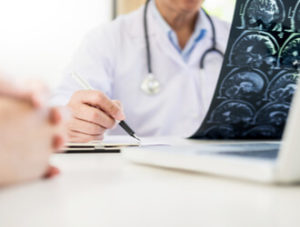 Treatment of head injuries usually begins at the emergency room, in open head injury cases treatment begins with suturing the open lacerations, repairing the skull, or even brain surgery to remove foreign objects, or treat bleeding of the brain. In closed head injury cases treatment consists more of rest, medication, and specifically diagnosing the cognitive defects or symptoms a developing an approach to deal with the symptoms. If the head injury is a severe traumatic brain injury there is likely some stabilization treatment performed by the EMTs or resuscitation requirements if the head injury begins to affect respiration or heart beat.

After the immediate effects of a head injury are treated in the emergency room, most injury victims are then advised to follow up with their family doctor or straight to a neurologist for further treatment. Neurologists specialize in head injuries and can treat the symptoms through medication and keep tabs on your symptoms and progress to determine if further treatment is necessary.

Neuropsychologists and ‘NeuroPsych’ Evaluations or NPE

For any of our clients that have suffered a head injury, we strongly recommend seeing neuropsychologist. A neuropsychologist specializes in diagnosing your and affect a head injury may have had on cognitive, motor, behavioral, linguistic, or executive functioning. The neuropsychological evaluation or NPE is a good tool for looking into the actual problems caused by a head injury. Since most head injuries are not diagnosed through an MRI or CT, a NPE is a critical tool in assessing the extent of an individual’s head injury.

Typically a neurologist will recommend patients to see a neuropsychologist, however, if they do not, we have a network of the best neuropsychologists that are willing to treat our patients and help assess the nature and extent of their head injury. Even though these tests do not treat the head injury itself, it is important to know what problems you have so that they can be monitored and evaluated as time passes. Additionally, in personal injury lawsuits involving brain injuries, neurological tests are critical in demonstrating to the jury the extent of a brain injury. Many juries want to see more evidence about the brain injury symptoms than just the victim telling them what they are suffering, NPEs are a tool to show a jury additional evidence of what the victim is suffering. This also helps shore up the victim’s credibility on other issues important to their case.

The only real treatment for closed head injuries is time and rest. The symptoms of the head injury can be treated as follows:

The many other symptoms of head injuries are typically treated with time. It is most important to first understand what your symptoms are, make sure those problems are communicated to a neurologist or family doctor, and then your doctor can coordinate the best treatment plan for you, including the use of specialists.

Most important, do not just hope the symptoms go away, even if the only treatment is time, medical care is important to assess the problems and be able to gauge if they are getting better over time. Additionally, form a lawyer’s viewpoint, the medical treatment documents that you have the injury and symptoms, which is evidence to support a favorable verdict in an injury case.