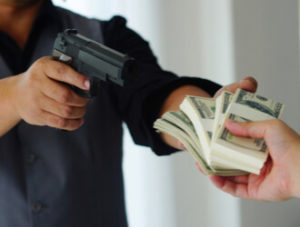 Robbery is a crime that involves stealing something from another person, either by force, fear, or intimidation. These two elements are critical to proving that robbery has taken place, not only must there be theft, but also threat of, or use of force. This distinction is what makes robbery a different crime than theft or burglary.

The crime of robbery is contained in Chapter 569 of the Missouri Revised Statutes. Specifically, Section 569.020 says that a person commits robbery in the first degree when he or she forcibly steals property in conjunction with one of the following additional actions:

In Missouri, robbery in the first degree is a Class A felony, and carries with it a term of imprisonment that can range from 10 to 30 years.

A robbery charge, regardless of the degree, should always be taken seriously since the consequences of a conviction are so grave. Long-term loss of freedom and a permanent criminal record are just a few of the many penalties that can result from a robbery conviction in Missouri. Given the violent nature of the crime, prosecutors are often quite aggressive in their attempts to secure robbery convictions. With so much on the line, it’s crucial that you seek out an experienced Missouri criminal defense attorney who will work hard to secure your freedom.

For a free consultation with Sansone & Lauber about your case call (314) 863-0500 to speak with a lawyer over the phone or set up an appointment.