If you don’t get paid, we don’t get paid.
Free Consultations 314-863-0500
Home Blog Use Of Medical Literature Or “Authoritative Texts” In Missouri Medical Malpractice Cases 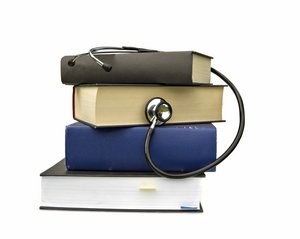 How to Use Medical Literature Effectively in a Negligence Case against a Healthcare Provider:

Use of medical literature is governed in part by R.S.Mo. § 490.065. This statute governs, in part, the role of expert witnesses in civil trials and explains the types of facts and data upon which an expert may base his opinion. Subsection 3 of the statute states, in pertinent part, as follows:

Thus, R.S.Mo. § 490.065(3) makes it clear that an expert witness may rely upon data like medical literature, which has traditionally been thought of as hearsay, so long as the data is “of a type reasonably relied upon by experts in the field … [and is] otherwise reasonably reliable.”

At least three Missouri cases clearly state that it is permissible for a medical negligence expert to rely upon medical literature during their direct examination and in support of their opinions.

Medical journal articles may be used on direct or cross-examination to test the knowledge of the expert and the reliability of his opinion. See Stallings… (direct examination); Ball v. Burlington Northern RR. Co., 672 S.W.2d 358, 363 (Mo. App. 1984)] (cross examination). This is usually accomplished by reading from the publication and asking the expert if he agrees with the statement, as was done in this case with the three medical articles which were used at trial. (Emphasis added.) Id. at 664. The court noted that the medical literature does not become substantive evidence in the case even when used on direct examination, but it may still be referred to, discussed, and published to the jury as data upon which the expert relies. Id. at 665, but cf. Kelly v. St. Luke’s Hosp., 826 S.W.2d 391, 396 (Mo. App. 1992). (Emphasis Added).

In Callahan v. Cardinal Glennon Hosp., 863 S.W.2d 852 (Mo. banc 1993), the Missouri Supreme Court held that plaintiff had made a submissible case of causation, and indicated its approval of plaintiff’s use of literature to support his position:

“In forming his opinions, Dr. Burmeister relied on his own experience concerning the interaction between viral infections and bacterial infections. He relied on published studies in other areas of medicine indicating that endotoxins in human beings can cause a person’s immune system to be suppressed and cause a person to be more susceptible to disease. Furthermore, he relied on the package inserts and Physician’s Desk Reference information that accompanies the polio vaccine, which caution against the use of the vaccine in a patient who is suffering from an acute illness; in a patient with genetic immune deficiencies; and in a patient whose immune system was suppressed due to other factors, including steroids, immune serum globulin therapy, radiation, chemotherapy, and leukemia. In combination, this information provides reliable support for each step of reasoning Dr. Burmeister used to conclude that if endotoxins have suppressed a person’s immune system, the attenuated polio virus in the vaccine may overwhelm a person’s immune system and develop into the polio disease …. Dr. Malone’s testimony, based on various immunology studies that reported an immunosuppressive effect following the administration of endotoxins to healthy adults, reached the same conclusion as Dr. Burmeister.” (Emphasis added.)

The Statute and cases above make it clear that experts can rely upon medical literature to support their opinions and discuss the content of the literature as an exception to the hearsay rule. What the above case do not discuss is exactly how that information is “published” to the jury. Was the text actually displayed or passed to the jury rather than just read or discussed? Peterson v. National Carriers, Inc., 972 S.W.2d 349 (Mo. App. 1998) is instructive on that point. The court in part relied upon R.S.Mo.§ 490.065 to support it’s opinion that it was proper for the expert to rely on hearsay evidence and discuss it during his direct exam because it was of a type experts in his field usually rely on. The Court approvedthe expert witness’ use of an enlarged copy of the accident report (with certain redactions) for display to the jury. This of course is consistent with the notion that evidence properly admitted should also be available for proper demonstration so that the jury can best understand it.

Therefore, medical texts reasonably relied upon by experts should be admissible into evidence and thus view able by the jury. This is important because the authoritative test is not biased, it is not being paid by either party, and juries trust publications more than hired experts.