If you don’t get paid, we don’t get paid.
Free Consultations 314-863-0500
Home Blog Missouri Still Has Only a Partial Ban on Texting and Driving

Missouri Still Has Only a Partial Ban on Texting and Driving 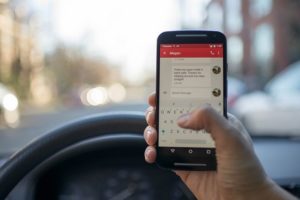 Distracted driving is increasingly a cause of accidents across Missouri and the country at large. The most significant reason for this rising risk is the use of cell phones for texting and social media while driving. Since the smartphone has become ubiquitous, it has become increasingly common for drivers to send and receive text messages while on the road.

The vast majority of states have responded to this threat by introducing bans on texting while driving. While Missouri is among those with laws on the books against texting and driving, its laws are significantly less thorough than those of most other states.

Missouri Law on Texting and Driving

Missouri is one of 48 states to institute some level of ban for texting while driving, but it also falls short of the other 47 because of the significant limitations of the law.

The current Missouri texting and driving laws ban texting while driving only for those who are under the age of 21. While the spirit of the law has been praised, this has led to significant difficulties in enforcing the law and questions about the merits of its limitations.

After all, it is a heavy burden on the police officers watching the roads to determine, first, if the driver passing by is under 21, and second, if they are texting or simply dialing a phone number, which is not illegal.

Furthermore, the penalties for violating this law are extremely light. At the moment, violation of the Missouri texting while driving law would only mean a $20.50 fine.

These shortcomings have led to efforts to extend the ban to drivers of all ages. Recent attempts to pass legislation have failed, however.

Most recently, a bill was defeated in February which would have eliminated the age limitations on the law. Bill sponsor Rep. Galen Higdon vented his frustration after the vote, arguing, “The voice of the people in our community want a distracted driving law.” At this moment, though, as Rep. Higdon also points out, “It doesn’t seem that the general assembly agrees with that.”

While NTHSA does not single out cell phones from other distracted driving threats (such as eating and drinking, talking to passengers, playing with the radio, and using navigation systems), there is little doubt that the increase in cell phone use in the car is at least partly responsible the incredibly high numbers associated with distracted driving accidents.

If you have been involved in a distracted driving accident in Missouri, the lawyers at Sansone & Lauber can help you find out if you are entitled to compensation. Contact us today by phone or online for a free review of your case.