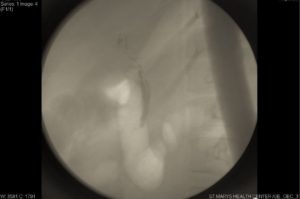 Currently our St. Louis medical malpractice law firm, Sansone & Lauber, is handling multiple Missouri negligent gallbladder removal cases involving laparoscopic procedures known as a “lap-choli”. The common theme in these cases is the negligent surgeon’s failure to adequately dissect and identify the anatomy of the gallbladder, and the adjacent bile ducts and vascular system before proceeding to clip, cut, and remove.

Recently we were contacted by young Missouri woman who has spent the last several months in the hospital because the negligent lap choli surgeon left surgical clips on her common bile duct creating an “occlusion” or in lay terms, a blockage. See clips left on common bile duct in radiology image to the right. Prior to removing a gallbladder the surgeon must identify and dissect the anatomy in order to confirm the cystic duct, clip and cut it, not the common bile duct.

As always, the negligent Missouri surgeon‘s operative report was flawless and according to him the original procedure went perfectly, he identified the anatomy properly, did full circumferential dissection of the gallbladder and ducts, separated the cystic artery from the cystic duct, applied two clips to the cystic duct, cut between them, and then removed the gallbladder.