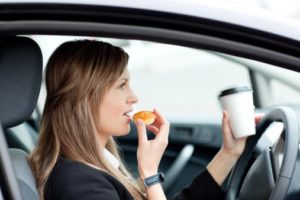 More than two-thirds of American drivers say cellphone use is the most annoying habit on the road, according to a survey conducted for Expedia. But despite getting aggravated by other motorists who text, talk and email, more than half of the drivers surveyed admitted doing the same thing, USA Today reports.

Expedia’s 2014 Road Rage Report surveyed 1,001 drivers in late April and early May and found that 69 percent call their counterparts who use cellphones the most aggravating people on the road. At the same time, 55 percent say they sometimes use a smartphone while behind the wheel.

The problem is these driving habits are more than just pet peeves. They are dangerous enough to lead to serious car crashes.

In 2012, 3,328 people were killed in distraction-related wrecks and an estimated 421,000 people were injured in crashes involving a distracted driver, the National Highway Traffic Safety Administration reports. The estimated number of injuries represents a 9 percent increase in injuries linked to distracted driving from the previous year.

According to distraction.gov, the official U.S. government website on distracted driving, activities such as texting and talking on the phone, eating and drinking, talking to passengers, grooming, reading, using navigation systems and adjusting the radio amount to distractions because they divert a driver’s attention away from the main task. Any activity that takes your focus off the task of driving is a distraction.

Drivers are frequently distracted, and distractions are estimated to be related to 15 percent to 25 percent of crashes, according to the Governors Highway Safety Association.

Texting is considered the worst distraction because it demands a driver’s visual, manual and cognitive attention. Texting requires a driver to take their hands off the wheel, their eyes off the road and their mind off of driving. It likely increases the risk of a car accident more than just talking on a cell phone.

Some 660,000 drivers use cellphones or electronic devices at any given daylight time in the country, according to distraction.gov.

Missouri is one of only seven states that does not have a blanket prohibition against texting while driving. Only driversage 21 or younger are prohibited from texting behind the wheel. Anyone under age 22 who is caught texting while driving faces a fine of $200. Traffic accidents are the leading cause of death among people 15 to 20 years old. Approximately one in four crashes in Missouri involve a young driver, and inattention is a contributing factor in many preventable car accidents.

Missouri’s Arrive Alive initiative attempts to reduce serious injuries and fatalities from traffic accidents, including those caused by distracted drivers. Unfortunately, annoying – and dangerous– driving habits are likely to persist on Missouri roads until the state takes a serious stand against texting and driving. Texting and driving is more than just an annoying habit. It can