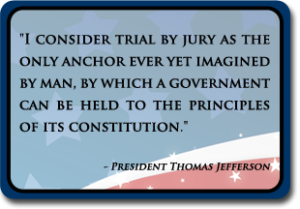 The 7th Amendment to the United States Constitution guarantees an individual’s right to a trial by a jury of his or her peers, meaning the people in their community. This right is very clear, yet the politicians in Missouri who always pound their chests about not infringing and the 2nd Amendment (which I absolutely agree with); have no problem trashing the 7th amendment to try to protect negligent doctors and hospitals (really insurance companies) at the expense of innocent victims and the taxpayers. That’s right, the tax-payers, because when a victim is severely injured, denied compensation because of malpractice caps and tort “reform” laws, the malpractice insurance company makes more money and the victim is often forced to turn to Medicaid, Medicare or other governmental assistance. For a very clear article about this see St. Louis Post Dispatch Article: “Right to trial protects patients from negligent doctors.”

Insurance companies in Missouri have gone on the offensive and are now lobbying Missouri legislators to put liability limits for medical malpractice cases in place after the Missouri Supreme Court struck down the previous cap last year. In the coming months and years you will hear, once again, all the debunked myths about doctors fleeing the state, being forced out of practice, etc…

A law passed by state legislators in 2005 capped noneconomic damages in medical malpractice lawsuits at $350,000. The measure was meant to put limits on growth in medical liability lawsuits. Prior to that, the limits were $579,000 (adjusted for inflation) for non-economic damages against each defendant for each negligent act. The state Supreme Court heard a case last year on the 2005 limits and determined that the cap was unconstitutional.

The Supreme Court voted 4-3 to overturn the cap, citing Missouri’s Bill of Rights which says that the then existing right to trial by jury shall remain inviolate. Given that at the time the Bill of Rights was enacted in 1820, citizens of Missouri had a right to seek damages for medical malpractice claims, the Supreme Court decided that limits on the amount of damages that would restrict a jury’s fact-finding role would violate the constitutional guarantee.

Doctors have aligned with insurance companies to pressure legislators to reinstate the damages cap. They claim that the limit helped the medical community in the state by removing some of the risks associated with hugely inflated med mal verdicts. The cap helped lower medical malpractice insurance premiums and doctors claim that kept more doctors in business in the state, lower costs to consumers in the process.

Those opposed to such a cap on damages argue vehemently that negligent doctors should not be protected from their own misconduct. Damage caps do nothing to prevent filing frivolous damage claims and only come into play once a jury has decided that a defendant was negligent and that the injured plaintiff suffered real harm. The caps only serve to protect negligent defendants from having to be totally accountable for the damage they caused.

The fact is that medical mistakes lead to the preventable deaths of 100,000 people each and every year across the country. This horrifyingly high figure places it as one of the leading causes of death in the United States. Those that are responsible for causing such extreme harm should be held responsible for the actions, not have an arbitrary cap put in place protecting them in ways their unsuspecting patients never were.