If you don’t get paid, we don’t get paid.
Free Consultations 314-863-0500
Home Blog Texting and Driving Statistics for Teens to Consider 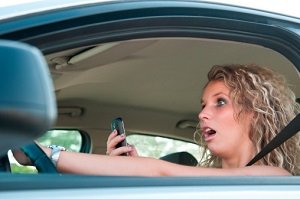 The words “Where U At” will haunt Merry Dye forever. They’re the last ones her 18-year-old daughter Mariah West sent before she was killed while texting and driving on the way to a Springfield Cardinals game.

On May 29, the fifth anniversary of the fatal distracted driving accident, Dye wore her daughter’s picture around her neck as she spoke at a high school event where she encouraged students to pledge not to text and drive, according to the Springfield News-Leader.

She urged students to put their phones in the glove box while they’re driving. “You can’t just go, ‘I pledge and now I have a car.’ You have to have a plan in place,” she said

Missouri State Highway Patrol Sgt. Jason Pace displayed a cellphone as he explained to the students the difficulty of telling people they lost a loved one in a car crash. He spoke of a wreck near Hillcrest High School that claimed the lives of two 17-year-old students and an elderly couple.

In a society consumed with technology, cellphone use is becoming one of the most dangerous forms of distracted driving. While distractions can also include activities such as eating, grooming and talking to passengers, experts consider cellphone use to be the biggest problem because it takes a driver’s hands, eyes and attention away from the road.

Consider these statistics from textinganddrivingsafety.com:

This is a national epidemic that requires action on the part of parents and teens.

Merry Dye’s message should be taken to heart by young and experienced drivers alike. Keep your hands on the wheel and your eyes and attention on the road. The text message can wait, or you might not reach your destination.