In February 2009 we were hired to represent a St. Louis area pedestrian that was dragged by a drunk driver’s car and severely injured. The pedestrian came upon a van parked in the middle of Lindbergh Road and saw the driver slumped over the steering wheel. Our client, believing the driver had a heart attack, started to assist the driver of the van by reaching into the car and trying to put the car into park. The driver appeared to be passed out at his wheel in the middle of the road. The driver woke up and rapidly drove off, dragging our client along. 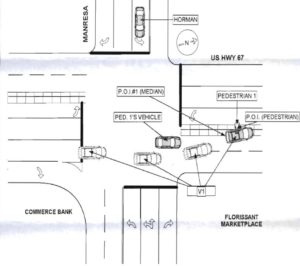 When we represent someone hurt by a drunk driver or the family of someone killed by a drunk driver, we handle all aspects of the civil case but also act as a legal liaison between you and the prosecuting attorney’s office when dealing with the criminal case. The criminal case is not the victim versus the drunk driver; it is “The State” or “The People” versus drunk driver. Many prosecutors’ offices will keep the victim or their families informed, however, all too often do the prosecuting attorneys quickly dispose of the criminal cases through plea deals without ever contacting the victim or their family. It is very important for your DWI accident attorney to contact the prosecutor’s office very soon to make sure their file has been properly marked to reflect that an injury resulted from the driver’s actions of DWI.

Recently, we entered into a case just in time to stop the guilty drunk driver from getting away with a sweet deal that would have kept the DWI and injury he caused off his record. We informed the court just a few weeks before the deal was going to be final and demanded that the driver not get such a plea deal. Any plea deal has to be approved by the judge and when we present to the judge a victim statement, the Judge will think twice about giving a favorable plea deal to a drunk driver that injured you.

This is not only important to make sure the criminal punishment fits the crime, but also to ensure that the driver’s admission of guilt, required to get a probation deal, is admissible in the civil case. If the driver gets a “No contest” plea then the admission of guilt is not usable in the civil case. But a “plea of guilty” regardless of probation received, is admissible as evidence in the injury case to prove legal intoxication and thus a major hammer for the victim in getting a favorable settlement or verdict.

In Missouri prior pleas of guilty to a DWI are admissible in the civil case if the plea was pursuant to an SIS, SES, or resulted in a conviction. However, plea of guilty pursuant to an SIS in a municipal or City court may not be admissible. If the situation arises that the criminal charge is dismissed or the plea or conviction is not allowed into evidence, that is OK, as an experienced injury lawyer with a past of defending DWI cases years ago, I know exactly how to present all the evidence necessary to convince a jury that the driver that injured you was drunk at the time of the accident.

St. Louis lawyer Ben Sansone has successfully handled multiple drunk driving and alcohol related car accident cases in Missouri and Illinois. After spending many years handling DWI defense and combined with his personal injury experience, the results makes for an ideal St. Louis lawyer for pursuing cases on behalf of injured victims and against intoxicated drivers. Hurt by a drunk driver? Call for a free consultation (314) 863-0500 or contact us online to set up an appointment with a lawyer.