If you don’t get paid, we don’t get paid.
Free Consultations 314-863-0500
Home Blog Jury Trial Waiver Clauses – Enforceable In Missouri? 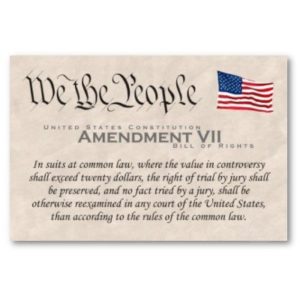 Our injury law firm has handled many injury cases that occur on an apartment complex’s property, and sometimes the tenant that is injured signed an apartment lease with a waiver of future personal injury clause in it.

Well, what about jury trial waiver clauses in the same types of apartment leases?

The courts looks at several factors, one being that the jury trial waiver must be very clear and a clause on its own, not buried int he contract. In Malan Realty Investors, Inc. v. Harris, 953 S.W.2d 624 (Mo., 1997.), the court held that “The standard that is universally applied to prevent overreaching and to protect against unequal bargaining positions requires that the trial court determine whether the waiver was knowingly and voluntarily or intelligently made.” “To effectively waive a jury trial by contract, clear, unambiguous, unmistakable, and conspicuous language is required.

A jury trial waiver provision will never be implied but must be clearly and explicitly stated. Additionally, the courts have examined the following factors: a) negotiability of the contract terms, b) disparity in bargaining power between the parties, c) the business acumen of the party opposing the waiver, and d) the conspicuousness of the jury waiver which must be met.

Additionally, Missouri courts provide for a jury trial even when a purported waiver may exist. A waiver of a right will not apply to all torts. Savannah Place, Ltd., v. Heidelberg, 164 S.W.3d 64 (Mo. 2005) (emphasis added). Savannah cites Malan and discusses it in reaching its conclusion but still holds that jury waivers are not valid to waive certain torts and matters of equity.

There is an argument that all jury trial waiver clauses are unconscionable and therefore void. The Missouri constitution holds that the right to a civil jury trial is to be preserved inviolate. This is clearly established by statute- RSMo § 510.190; by the Missouri Constitution- article I, section 22(a); and by the Missouri Rules of Civil Procedure- Rule 69.01(a.)

Was the jury trial waiver specifically pointed out and/or initialed before the contract was signed? If not, then probably an unknowing waiver and therefore invalid. The fundamental nature of a due process right to a jury trial demands that it be protected from an unknowing and involuntary waiver. The standard that is universally applied to prevent overreaching and to protect against unequal bargaining positions requires that the trial court determine whether the waiver was knowingly and voluntarily or intelligently made.

Was the lease a contract of adhesion, meaning a contract presented by a business on a “take-it-or-leave-it” basis to an unsophisticated consumer who lacked legal representation. In Missouri, an adhesion contract, as opposed to a negotiated contract, has been described as a form contract created and imposed by a stronger party upon a weaker party on a ‘take this or nothing basis,’ the terms of which unexpectedly or unconscionably limit the obligations of the drafting party. It is unconscionable to take advantage of an unequal bargaining position and obtain a contract or term which results in a gross disparity of values exchanged.’

The issue of contractual waivers of jury trials appears to be the only issue in which Malan and the instant case are similar. In regards to other issues, one important distinction is that the lease in Malan was “… a written lease agreement for commercial retail space,” Malan at 624, and Malan involved, “…commercial entities engaged in a business transaction that, by all appearances, was an arms-length negotiation. Accordingly, we conclude that the waiver of a jury trial was made knowingly and voluntarily.” Malan at 628. The instant case involved one commercial entity and an individual tenant leasing a residence that she was (falsely) led to.

The standard that is universally applied to prevent overreaching and to protect against unequal bargaining positions requires that the trial court determine whether the waiver was knowingly and voluntarily or intelligently made. If both the Plaintiff and the defendant were commercial entities engaged in a business transaction that, by all appearances, will be considered an arms-length negotiation and thus the clause will be enforceable. If the parties are not both business entities, the court must look to the knowledge of the parties to make sure one party was not unfairly taken advantage of in waiving their constitutional right to a jury trial.

Questions to ask: was there any negotiating of the contract terms? did the two parties had a large disparity in bargaining power? business acumen of the party? commercial entity in the business of real estate contracts, particularly those involving apartments? Small landlord who is new to the world of leases, contracts or negotiation? Did individual understand the importance of jury trials, exculpatory clauses, or waivers.

The case of MIF Realty v. Pickett, 963 S.W.2d 308 (Mo. App.W.D., 1997), provides examples of the elements needed for a contractual wavier to be “knowingly and voluntarily”, and hence validly, entered into. MIF Realty states, “In Malan…the Supreme Court required that the validity of a contractual waiver be determined according to whether the waiver was ‘knowingly and voluntarily made, a requirement designed to protect against overreaching and inequitable bargaining positions.’…We find no evidence that Pickett was under any bargaining disadvantage when he entered into the agreements to purchase the property. Pickett is an attorney. We presume that he understood the importance of reading the agreements and was able to understand them. The contract clearly, unambiguously and unmistakably set out appointment of a receiver as a remedy. Had Pickett desired other terms he should have negotiated for them in what appears to have been an ‘arms-length,’ commercial business transaction.”

Is the clause initialed by the parties? Are the signatures directly below the clause? Example of a conspicuous waiver clause: “THE UNDERSIGNED HEREBY MUTUALLY RELINQUISH AND WAIVE THEIR RIGHT TO TRIAL BY JURY.” Add a signature line or initials below or beside that clause and it is conspicuous under Missouri law.

No Waiver Can Apply To The Tort Claims Presented

The Court held in Savannah Place, Ltd., v. Heidelberg, 164 S.W.3d 64 (Mo. 2005) that the parties were entitled to a jury trial in spite of the existence of signed jury waivers. “Appellants will first be accorded a jury trial on their claims at law, namely their counter-claim against Savannah Place and their third-party claims against Carol Jones and the Jones Trust.” Savannah Place therefore conclusively establishes that, at the very least, Defendants/Counterclaim Plaintiffs have the right to have their tort claims, including torts arising from violations of the law, tried to a jury.

The case of State ex rel. Leonardi v. Sherry, 137 S.W.3d 462, 473 (Mo., 2004), states, “Missouri trial courts have jurisdiction to try cases involving requests for equitable relief and damages in one proceeding. The trial court has discretion to try such cases in the most practical and efficient manner possible, consistent with Missouri’s historical preference for a litigant’s ability to have a jury trial of claims at law. Unless circumstances clearly demand otherwise, trials should be conducted to allow claims at law to be tried to a jury, with the court reserving for its own determination only equitable claims and defenses, which it should decide consistently with the factual findings made by the jury.”

Recently in the 2013 decision of Fuller v. TLC Prop. Mgmt, the court held:

It is time to address the very real issues facing Missourians who are injured by the negligence of their landlords. This Lease was partially a conveyance. TLC agreed to convey the premises of M303 to Fuller for a period of time and Fuller agreed to pay the fair market value for the conveyance. The additional contract language contradicts our common law and statutory provisions of good faith and fair dealing in the bargaining of contracts. An unconscionable contract is one that “no man in his senses, not under delusion, would make, on the one hand, and which no fair and honest man would accept on the other. The average consumer would not understand that signing a lease for the rental of an apartment unit would effectively negate all prior negligence law and allow the landlord to show no regard for the tenant’s safety. This clause is clearly unconscionable and, as such, is against public policy.” Fuller v. TLC Prop. Mgmt. (Mo. App., 2013) SD 31931 a p. 21.