If you don’t get paid, we don’t get paid.
Free Consultations 314-863-0500
Home Blog Texting Behind the Wheel Leads to Deadly Hit and Run Car Accident

Hit-and-Run Driver Was Texting When He Hit Pedestrian 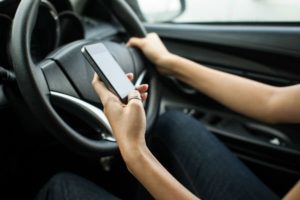 A Madison man charged with hitting and killing a pedestrian in Granite City was texting when the fatal crash occurred, according to the police report. The hit and run accident is the latest example of the danger of distracted driving.

According to a St. Louis Post-Dispatch article, Travis E. Crain, 23, faces felony charges of reckless homicide and failure to report an accident involving injury or death. The accident victim Mark S. Harris, 25, of St. Louis, died shortly after police found him lying along the 2500 block of Edwardsville Road in the early morning hours of April 19.

Surveillance camera video near the scene of the crash showed a 2004 silver Dodge Dakota linked to Crain hitting Harris as he crossed the street just after 3 a.m. Investigators also determined the driver was texting at the time of the crash.

State Attorney Thomas Gibbons issued a statement calling the incident a “reminder of the dangers of texting and driving.”

With many people becoming increasingly attached to their cell phones, even while driving, distracted driving has become a serious problem in Missouri and across the nation.

Distractions include any activity that takes a driver’s eyes off the road or hands off the wheel, from eating and grooming to changing radio stations and even talking to passengers. Using a cell phone, whether talking or texting, is considered one of the most risky distractions because it averts a driver’s eyes and mental focus.

Texting or checking emails often takes the driver’s hands off the wheel, eyes off the road, and mind of the task. Even talking on a cell phone while driving can make a motorist miss about 50 percent of his or her surroundings.

Sending a text typically takes about five seconds. That’s the equivalent of travelling the length of a football field at 55 mph blindfolded, according to distraction.gov, the official U.S. government website for distracted driving.

According to the Missouri State Patrol, distracted drivers caused nearly 7,000 vehicle accidents, including 17 fatalities from March through May of 2014.

With prom season and graduation approaching, teenagers and college students, the most accident prone drivers, should keep their eyes on the road when driving.

Missouri law prohibits drivers 21 and younger from sending text messages while driving. Most states, Washington, D.C., Puerto Rico, Guam, and the Virgin Islands ban text messaging by all drivers, according to the Governors Highway Safety Association.

Nationwide, 3,154 people died in distraction-related crashes in 2013, according to distraction.gov..

Taking your eyes off the road to send a text message or read an email can lead to disaster, as was the case with the Granite City crash. In that instance, criminal charges were filed by police. A family who loses a loved one in a distracted-driving crash also can bring a civil lawsuit to hold the at-fault driver and their insurance company accountable for the harm caused.

A car accident attorney experienced with handling cases involving distracted driving and pedestrian cases can guide you through the legal process and make sure you and your family receives the reward you deserve for medical bills, mental anguish, and injuries. Don’t let one person’s distraction ruin your family members’ lives.