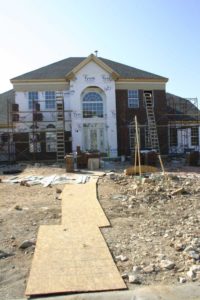 In October 2008 a St. Louis personal injury victim and carpenter was working on a St .Louis Missouri residential two-story home that was under construction in St. Louis County. On that same day a negligent construction worker and roofer who was an employee of St. Louis based Allen Roofing & Siding was on the roof of that same residential house installing shingles.

At some point in the afternoon, while my St. Louis personal injury client was walking out of the front door of the house, a negligent roofer threw a long and heavy “toe board” from the tall second story roof, that board speared my client directly in the head, giving rise to serious injuries and a St. Louis Missouri personal injury claim as well as a Missouri workers’ compensation claim. The toe board is heavy, 14 feet long, and consists of two 2x4s tacked together, the carpenter immediately suffered severe personal injury, collapsed to the ground in a pool of blood, and went into seizures.

See pictures below depicting the hard hat, toe board, and area of the house showing how high up the roof is.

My personal injury client suffered a severe head and neck injury, has ongoing post traumatic brain injury symptoms, and had several teeth knocked out requiring a dentist and oral surgeon. The carpenter’s medical bills for treatment of his injuries are $66,070.

Allen Roofing and the roofer are liable for these injuries. The roofer negligently and recklessly tossed the toe board without any consideration for where it would land and who would be there. The carpenter was walking out the front door where a walkway path of plywood sheets was clearly marked and any reasonable person would expect people to walk on a construction site. Moreover, there were multiple other area the toe boards could have been dropped, as opposed to recklessly thrown, in the back and on the sides of the house where walkways were not established.

In addition to the claim against the roofer, my St. Louis personal injury client also had a St. Louis Missouri Work Comp claim as the injury sustained occurred at work. The St. Louis work comp insurance carrier paid total benefits of just under $100,000.

The 3rd party personal injury claim against the roofer and his employer settled for $400,000.00 and thus a combined St. Louis personal injury and workers’ compensation settlement of just under $500,000.00.