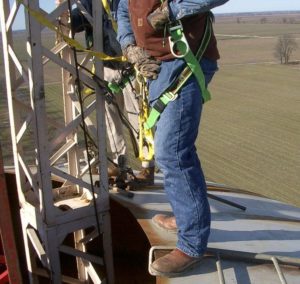 While working for Phoenix Fabricators my client’s late husband, Jason, was repairing weld lines on a water tower in Arkansas. He lost his footing and his lanyard and safety clip failed, allowing him to fall to a tragic and untimely death. The surviving spouse and children settled the Illinois workers’ compensation claim, and have a cause of action against the lanyard manufacturer through a wrongful death products liability lawsuit. The employer was found by OSHA to have violated several regulations including failure to have safety nets among several other serious violations. Unfortunately, in most cases and in this current case, workers’ compensation is the sole remedy available to an employee against their employer for injuries sustained on the job. This does not prevent us from filing a lawsuit against any responsible or negligent 3rd party.

Generally, the location of the injury or death dictates the applicable law, so in this case, Arkansas work comp law presumptively applied. However, under Arkansas law this wrongful death case would be capped at about $200,000, an amount that is disgustingly inadequate for the death of a young man. However, Under Illinois workers’ compensation law the wrongful death the cap is much higher, therefore, the work comp claim was filed in Illinois seeking work comp benefits pursuant to Illinois law. We argued that Illinois work comp law applied because the decedent was an Illinois resident and was hired over the phone while he was at his home in Illinois.

This allowed us to convince the workers’ compensation insurer to agree that Illinois law may very well apply and lead to a favorable workers’ compensation settlement of $500,000.00 present cash value. The decent was entitled to payments over a number of years which would have amounted to more than $1,000,000.00.

The 3rd Party Case: We are currently pursuing the manufacturer of the defective lanyard for a negligence and products liability/wrongful death case for the death of our client’s husband. This will allow us to recover damages in excess of workers’ compensation’s limited remedies that are capped by regulation in favor of employers. This case against the lanyard manufacturer is a multi million dollar case to compensate my client and her family for the death of her husband and her children’s father.