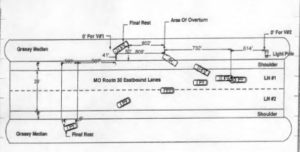 Auto insurance companies must keep their promises and live up to what they agreed to in advance, that is, to provide 100% for the harms and losses caused by an UNINSURED MOTORIST.

In April 2011 on a Saturday night an UNINSURED MOTORIST  is driving his car on Gravois Road approaching highway 141. He was driving  fast  and crashed into the back of our client’s pickup truck.

Both cars were totaled, the uninsured motorist got out of his car and ran from the accident.

We sued State Farm because the UNINSURED MOTORIST driver caused the car accident and injuries. State Farm denied that our client was hurt.

Our client paid State Farm, as part of his insurance premium, for Uninsured motorist coverage. Therefore, State Farm is responsible for the harms caused and “STANDS in the SHOES” of the uninsured driver, because that is what our client paid for.

State Farm is responsible for the harms and losses caused by the uninsured driver under our clients UNINSURED MOTORIST policy.

Even after being provided the police report and all the medical records State Farm claimed that our client was not hurt.

Before deciding to take our client case to trial our injury lawyers determined and were ready to prove:

That night our client went to St Anthony’s Emergency Room. They did a CT Scan and found a Scalp Hematoma. He had a large gash on his head that required stitches. The next day our client went to Progress West ER, and they diagnosed him with “Concussive Syndrome” and “Post-Concussion Syndrome”. The doctors found multiple abrasions and contusions and diagnosed a closed head injury.

Per the ER doctors, our client followed up with his family doctor. His family doctor sent him to a neurologist because of the head injury. The neurologist diagnosed him with Post-Concussion Syndrome “PCS” and confirmed our client suffered from dizziness, memory problems, concentration issues, and headaches.