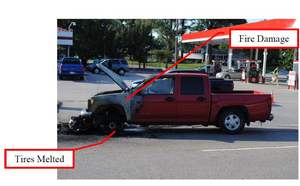 Recently Illinois personal injury lawyer Ben Sansone settled a Collinsville Illinois motorcycle crash for $260,000.00, which represented the full amount of auto insurance coverage available, a combination of liability insurance and “UIM” Coverage – Under-Insured Motorist Coverage. The car-bike collision was the result of an intersection accident. The motorcyclist was making a left turn across oncoming lanes of traffic when his bike stalled, he was moving his bike out of the intersection when the driver approaching the intersection did not stop, swerve, or even slow down; clear evidence that she was not paying any attention.

The investigation before the prosecution of this case by our motorcycle injury lawyers was crucial as there were at least six witnesses that had to be interviewed. Their recollection of the incident was recorded early on, and supported our negligence claim against the driver.

The investigating officer concluded that the at-fault driver activated her brake only one second before striking the motorcycle and that the driver had adequate time to respond to avoid the collision. The driver was negligent as she chose not to keep an adequate lookout and possibly chose to drive after chemotherapy when her mental alertness was affected by the therapy and medication.

Witness statements supported that the driver violated her duty to keep an adequate lookout as she had ample opportunity to observe the cyclist having stalled in the intersection and attempting to push his bike to safety.

Witness D.G. drove by the intersection in the same direction as the driver, before the motorcyclist made his left turn, no one was driving behind him, saw motorcyclist make a left turn and then have trouble with his bike. Observed him put his foot down and push himself, he then saw the red truck drive around the corner and cause the bike accident him without slowing down.

Witness B.R. saw motorcycle make a left turn, observed engine stall on the motorcycle, saw him pushing the bike with his legs while still seated on the bike and then saw the collision.

Early investigation was critical to proving the liability in this case. Additionally, the Collinsville Police Department did an excellent job with the accident reconstruction. The liability proof on this case all came down to timing, and it is very important to get witnesses to commit to times, distances, and speeds. Based on the evidence collected we were able to make a strong case that the driver should have seen the motorcycle rider sooner and avoided the collision, despite the fact the driver has a green light and the motorcycle was stalled in the intersection for a short time.

Public safety and the prevention of needless injury and death requires all drivers to pay attention when driving and not to drive when severely fatigued or under the influence of alcohol or even some medications. In this case there was also evidence that the driver recently had chemotherapy, most people know that chemotherapy treatment is very difficult physically and can lead to serious fatigue both physically and mentally.

If you or a loved one have been hurt or killed in a motorcycle accident call Illinois injury attorney Ben Sansone for a free consultation at (314) 863-0500, or contact us through our website here.