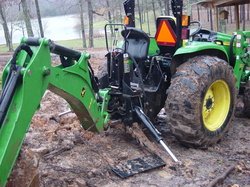 Recently we settled a negligent hydraulic hose repair and thumb injury case pending in Perry County Missouri. The thumb injury occurred as the result of a hydraulic tractor hose that sprung a small leak and shot a very thin and strong stream of hydraulic fluid into my client’s thumb. Hydraulic oil injection injuries are deceiving because the injury seems minor at first, however, the hydraulic oil is very toxic and quickly causes injury to spread.

A hydraulic fluid injection injury is probably the most dangerous injury that can result from a hydraulic hose failure. Mainly because the injury appears benign at first, so the injured person often dismisses it and no urgent medical care is sought. Injected hydraulic oil is highly toxic, so in addition to the physical, and often appearing minor, physical cut, the oil literally poisons you.

The most important things to remember: NEVER touch a pressurized hose with your hand and if you suspect an injection injury has occurred, get to an emergency room right away!

In our case, the victim was the owner of a tractor. One of the tractor’s hydraulic hoses became frayed near the end of the hose. The metal mesh under-layer began to show through the thick rubber outer-layer. The owner became concerned about the integrity of the hose and took it to the local hardware store for replacement. While at the hardware store they told him they could repair the hose rather than replace it, they would cut the frayed part off and reattach the hose connector at the end. The repair was made, however, a few inches of the hose still showed some metal coming through; the hardware store employee insisted it was safe and blew into it using his mouth to show no air was leaking through.

The owner reattached the hydraulic hose and within minutes a very strong and needle thin stream of hydraulic fluid came from the frayed area and shot into the owner’s thumb.

The hardware store was liable as they represented themselves as a competent and professional hydraulic hose repair and/or replacement shop. The tractor owner relied on the employee’s guarantee that the repair was done correctly, despite his concern.

This was a very unique case as hydraulic injuries resulting on negligent repair are very rare and there is little industry literature or material addressing how hydraulic hoses must be repaired. Therefore, the legal theory was a general negligence claim, no established standards or rules were violated, just what we claimed to be general negligence by the hardware store through its employee.

Sansone & Lauber is an experience personal injury firm handling cases all across Missouri and Illinois, including southeast Missouri areas of Cape Girardeau, Perry County, Scott County, and Iron County. Call us today for a Free and no obligation consultation with a lawyer. (314) 863-0500.